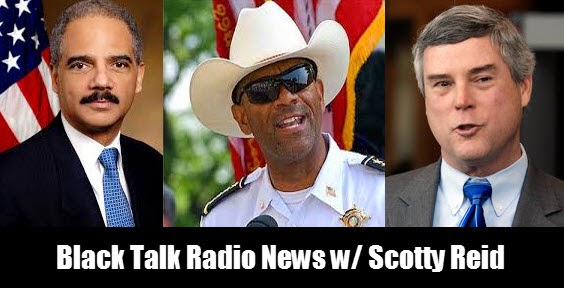 Tune in today as the host Scotty Reid goes over some of the day’s news, uncovered news and news covered from a counter-racist angle. AG Eric Holder held a press release on the conclusions of the DOJ investigation into the Ferguson police department. Fox News uses the proxy racist tool of the system Milwaukee County Sheriff David A. Clarke Jr to undermine US AG Eric Holders press release. Milwaukee County which is in Wisconsin has some of the highest rates of incarceration of Black males and Clarke has frequently engaged in victim blaming repeating popular racist myths about Black fathers.


St. Louis County Prosecuting Attorney Robert McCulloch held a press conference in front of the Justice Center in Clayton on Wednesday to discuss the DOJ investigation into former cop Darren Wilson that resulted in no charges. He refused to discuss the DOJ investigation into the Ferguson Police department which concluded they engaged in a pattern and practice of racism and discrimination against the Black residents of Ferguson.

L'Sana D'Jahspora, father of Cinque D'Jahspora who was shot in the back by a Jackson, Tennessee police officer held a event to raise awareness in Jackson about the deadly assault on the Black community by cops and his son’s case. He spoke to the local Jackson media about the case and how he has been mistreated in seeking answers. A Jackson grand jury failed to issue an indictment against Jackson Police Officer Raymond Bond this past Monday.