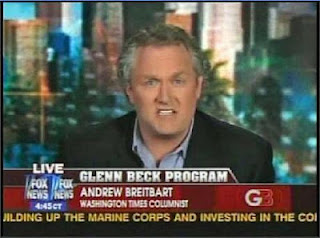 Conservitive blogger, video editor and all around lying scum Andrew Breitbart died just after midnight last night according to reports and the cause of death is a mystery. Reports have ranged from an enlarged heart to unspecified heart problems. The coroner has yet to issue a report for the exact cause of death. From conservative rags to so-called liberal outlets like the New York Times, many are trying to gloss over the fact the Breitbart was a racist and aliar who used manipulated and staged videos to attack political enemies on the left including voter registration groups like ACORN and his edited video of a Shirley Sherrod speech directly led to her being fired by the Obama administration.