The Sexualization of Gabby Douglass 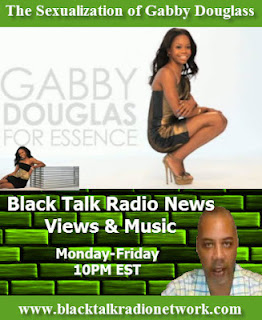 Essence magazine is at the center of controversy again and this time it is not because of its former white republican anti-Obama suspected racist Managing Editor Michael Bullerdick.

The new controversy involves new African-American icon Gabby Douglass the 16yr old gymnast who took the Olympics by storm in becoming the first Black gymnast to win both team gold and all around individual gold.

DOWNLOAD MP3
Essence has released promos of their photo shoot featuring the now famous Black teen athlete and a number of people believe the photos are to "grown" and sexualized for teenager. They are not alone, as several studies and psychologist have said that the sexualization of teen girls in the media is harmful to their mental and emotional health.

I will also get into some of the recent news surrounding more police brutality, an attempted lynching of a Palestinian youth, the UN calling on the US Govt to share information pertaining to inquiries into its use of drones, another Republican admits there are efforts to suppress the Black vote.