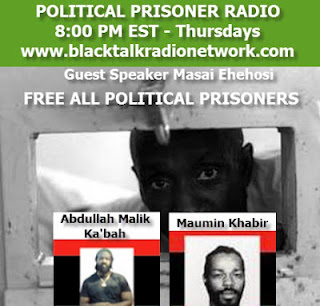 Our featured speaker tonight is Bro. Masai Ehehosi. He is a citizen of Republic of New Afrika and a long time activist in the New Afrikan Independence Movement. A former POW who, along with Sis Safiya Bukhari, was captured in 1975 and held on Virginia plantation for working with the Black Liberation Army.


DOWNLOAD MP3
He is currently working on efforts in support of political prisoner Imam Jamil Al-Amin aka H rap Brown and others being held by the United States of Corporate America. He is also a member of Critical Resistance, an organization committed to abolishing the Prison Industrial Complex. Topics Sis. Safiya Bukhari (PBUH), his former co-defendant and a horrific incident they both suffered in VA when police brutally murdered one of their comrades right in front of them. Let's "Gang-Up" On Oppression: Youth Organizations And The Struggle For Power In Oppressed Communities Political Prisoners
Brother Abdul Maumin Khabir is accused by the u.s. government of being an El Rukn general and "terrorist." Bro. Maumin spent about 9 years traveling, spending some time in Islamic and other countries outside of U.S. borders. A blatant miscarriage of justice took place when five men were convicted in federal court based on their alleged association w/an alleged 'street gang' the El Rukns, not because of any criminal activity. Maumin Khabir was initially offered a 30 year plea bargain, with a promise of no further indictments, if he would plead guilty to a charge of committing "terrorist" acts for the Libyan government. He refused because of his innocence.

Bro. Abdullah Malik Ka'bah (aka Jeff Fort) assembled a coalition of 21 gang leaders or 'generals' with about 5,000 members in the mid-1960's under a governing body called the "Main 21". He used his leadership ability to solve disputes and form alliances between different gangs and directed their activities toward community and political activism. Street organizations in Chicago had involved themselves with the Civil Rights and the Black Power/Nationalist movements and made great strides to become part of the revolutionary nationalist thrust of our people in the 1960s and early 1970s.

During the 1980's Bro. Ka'bah and members of the El Rukns organization were involved in a process of political transformation and each had engaged in actions which directly challenged U.S. interests, on local and/or international levels. In 1987, Fort was tried and convicted for conspiring with Libya to perform acts of domestic violence against the United States.