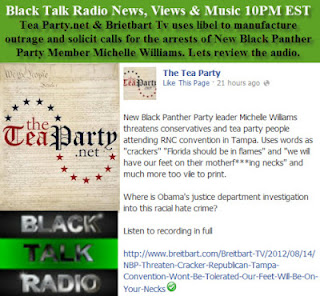 Breitbart Tv and the Tea Party uses deception and libel to manufacture outrage against Michelle Williams of the New Black Panther Party. We had to enhance the audio of the recording Breitbart Tv posted because it was barely audiable. Lets review both the audio clips they posted in this deceptive post.

Other News: Interview: 16 yr. old Malik Ayala who is a student in NYC was the victim of NYPD's Stop & Frisk in the hallway of his school. He went to court today and Mark Torres of the "People Power Movement" updated us on the outcome.

The Black Talk Media Project has revised it statement and created a petition pertaining to the upcoming issues of Essence Magazine that feature a "makeover" photoshoot of Gabby Douglass. Daniel Larsen was ruled innocent of a crime that sent him to a California prison plantation but yet he remains behind bars and has done so for the past 14 years. Among his supporters is newly exonerated former highschool football star Bryan Banks who is trying to make an NFL roster.

One of Mitt Romney's Bain Capital owned companies defrauded tax payers out of 40 million dollars. No one went to jail of course.