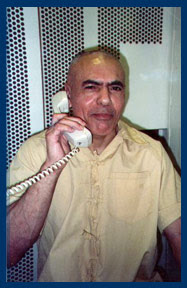 Former Black Panther and journalist Sister Kiilu Nyasha joins the program to discuss the case of Hugo L. A. Pinell, nicknamed "Yogi Bear". Mr. Pinell was coecred into a plea bargain for a crime he maintains he did not commit. "In 1964, a white woman accused me of rape, assault and kidnap. I was 19 years old. I turned myself into the authorities to clarify the charges against me which I knew to be falsified. The deputies beat me several times because the alleged victim was white, and the Public Defender and the Judge influenced my mother into believing that I would be sentenced to death unless I pled guilty. At their insistence and despite my innocence, I pled guilty to the charge of rape, with the understanding that I would be eligible for parole after 6 months. When I arrived at the California Department of Corrections, I was informed that I had been sentenced to three years to life." - Hugo L. A. Pinell Mr. Pinell has been incarcerated on the prison plantation for nearly half a century and the majority of that time has been in solitary confinement.