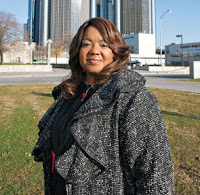 Because of historic corruption, the Detroit Police Department operates under a Federal Consent Decree. As part of that agreement with the U.S. Justice Department, the Detroit Police must tape all suspect interviews. Para-legal Roberto Guzman provides Black Talk Radio News with yet another exclusive insider look into the case. Mr. Guzman previews an important day for Devontae Sanford. Devontae Sanford’s is appealing Judge Sullivan’s decision to not allow him to withdraw his guilty plea and Sullivan’s refusal to allow confessed hit man Vincent Smothers take the stand and exonerate Sanford of the murders. The appeals brief is due in court tomorrow.

During the second part of the program, Dominique Moore and Kofi Brinkley, friends linked through Facebook who as members of the Facebook community are concerned about the inaction of Facebook administrators to take down a racist Trayvon Martin hate page. Although the page clearly falls within Facebook’s reporting parameters of racist, violent and hateful speech, the page remains up. The pages URL is even hateful to a big segment to the Facebook community, “https://www.facebook.com/deadblacksmakemehappy”

A poll on the page asks which is more fun, “Shooting” or “Stabing blacks”. Kofi Brinkley will share the email response he got back from Facebook staff concerning the racist Facebook page.
Download Free MP3