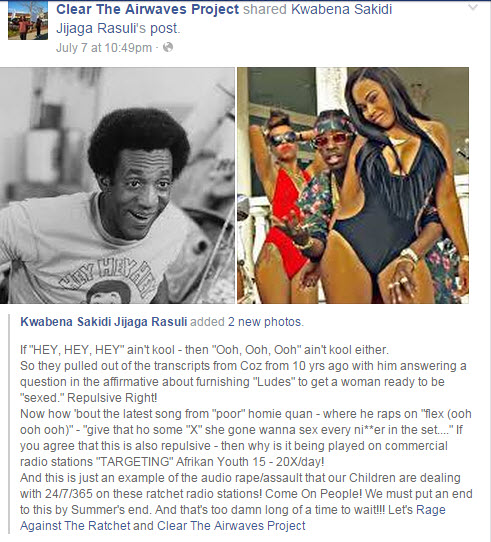 Today we will be speaking with activists associated with Rage Against the Ratchet & Clear The Airwaves Project. With disclosures from court proceedings involving Bill Cosby being made public with him admitting to obtaining drugs to have sex with young women, activists working to clean up the FCC regulated radio airwaves said if what Cosby did was wrong then why is that same society allowing date rape music to be pushed via the public airwaves?

The truth of the matter is that date rape drugs have been promoted in the United States and elsewhere since the early 70s with ads for Spanish Fly appearing in various print publications. Spanish Fly advertisements suggest that drug will make women hot and horny and ready to have sex. Why are corporations who are disassociated themselves from Cosby still sponsoring radio stations that promote all kinds of negative behavior included giving young women drugs to have sex with them. If you do not think date rape with drugs is not a problem among the masses but something rich people do, remember this 16 yr-old female who was drugged at a party, raped and pictures posted on social media?

16-year-old girl from Texas says that photos of her unconscious body went viral online after she was drugged and raped at a party with her fellow high schoolers. But the victim isn’t backing down. She’s speaking out about what happened to her, telling her story to local press and asking to be identified as Jada.[/caption] Do white people and their proxies who create, sponsor and allow the broadcast of rape music have any culpability in "urban crime"? Are corporations including USA INC engaging in social engineering through media? Should groups like NAN and NAACP get involved to lend support to the Clear The Airwaves Project?