America in fact did not abolish slavery w/ Angela Chan 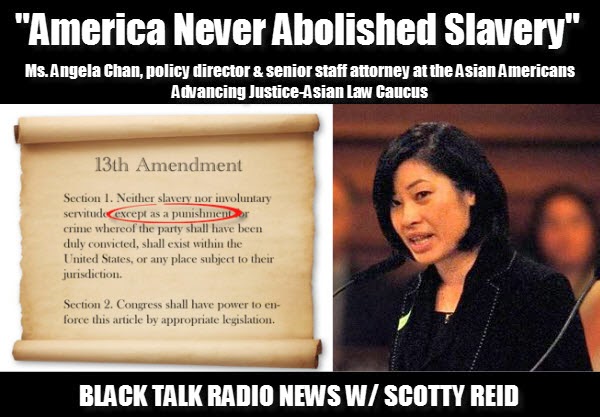 During the first hour today we will discuss some the social/political news of the day. A few stories on my radar is the false reports being circulated by right wing blogs that Michael Brown's mother took to facebook to post comments "celebrating" the reported shooting of two cops in Ferguson.

During the second hour we will be joined by Ms. Angela Chan to discuss legalized slavery in the United States and the illegal use of detained immigrant labor by prisons.

In the article Ms. Chan comes to conclusion that the 13th Amendment did not technically abolish slavery and that the loop hole that allows for slavery as punishment for crime has been exploited to create a slave labor force in America.

After we speak to Ms. Chan, lets revisit the news reports first surfacing when two non-Ferguson police officers were allegedly shot in front of the Ferguson police department. Since the shooting, the news being reported and statements by St. Louis law enforcement officials have been inconsistent and some deliberately attempting to tie protests against racist police terrorist to the shooting instead of treating it as an individual incident of alleged crime.