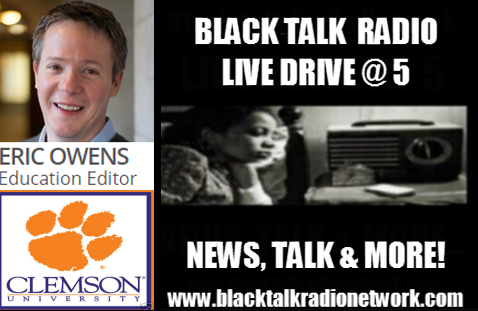 In continuing our examination of supposed free speech rights in the United States that have arisen out of the attacks on the French satirical publication Charlie Hebdo, we will welcome Eric Owens, Education Writer for the Daily Caller to today’s program. Mr. Owens recently publish an article on the Daily Caller titled "Radical Minority Group At Clemson Seeks SUSPENSION OF FIRST AMENDMENT" in which he reports that the student group See The Stripes is seeking to have Clemson suspend free speech protection under the First Amendment to the U.S. Constitution among its list of grievances and demands presented to Clemson University James P. Clements. Among the demands is the renaming of a campus building, Tillman Hall, which is named after an admitted white supremacist Benjamin Ryan Tillman (born Benjamin Ryan Tillman, Jr.; August 11, 1847 – July 3, 1918) who rose in politics to become the 84th Governor of South Carolina. Mr. Owens also seems to take issue with “public cash for minority groups and the construction of a multicultural center “. He also notes the student group “argues that the Clemson football team is deeply related to the pre-Civil War Southern institution of slavery.” If we have time we will get into some of today's headlines,
Support "New Black Media for the New Millennium" make a donation to the Black Talk Media Project! Black Talk Media Project PO Box 65, Mt. Holly, NC 28120 Via Paypal