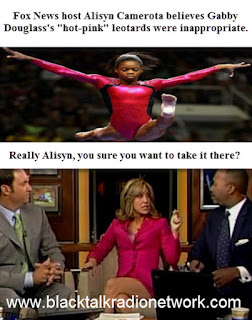 First it was an attack on Serena William’s golden C-walk dance after handily defeating Russian Maria Sharapova, now it is gold medal winning Gabby Douglass’s turn to be targeted by suspected racist host and guest collaborators.

Another dirty NYPD cop has been caught breaking the law in a kidnapping scheme but has yet to be charge. Where is the Grand Jury?