Does it matter if Ron Paul is racist or not? 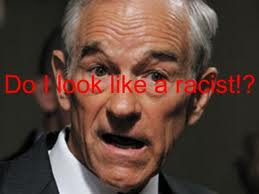 Ron Paul and his views on the drug war and foreign policy have been getting a lot of media attention as he runs for President hoping to get the Republican nomination. Since he has been surging in the polls, taking third in Iowa and currently surging in New Hampshire, corporate media and black media have made an issue about newsletters published by Paul in the nineties. Paul denies writing the newsletters in question and says they do not reflect his views.

Another publisher and writer, Yvette Carnell has written about the race issue and Ron Paul. Yvette Carnell who publishes the media hub "Breaking Brown" wrote,

"Over the past couple of weeks, two distinct memes about Ron Paul have grabbed hold; 1) Ron Paul is racist 2) a racist should never be President. I submit to you that even if both these suppositions are true, they still don’t matter, certainly not in any meaningful way that actually matters to African Americans." Read more...

I will talk to Yvette Carnell and discuss why racism should not matter in a meaningful way to Black people when it comes to Ron Paul.