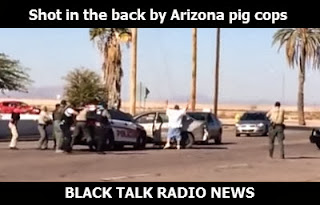 On today’s episode of Black Talk Radio News…
The Pinal County Sheriff’s Office has put another killer cop back on the streets a week after he shot an unarmed man in the back who was standing with his hands raised in the air.
The Obama administration announced steps it would take to free thousands of non-violent so called drug offenders from the federal prison plantation and the U.S. Senate Judiciary Committee passed legislation that "reduces the federal prison population" and "decreases racial disparities", the National Association of Assistant U.S. Attorneys released a statement opposing the reform.
A Louisiana mother begged a judge not to sentence her son to life in prison for being a drug addict who was found with a empty bag that contain cocaine residue by police. The judge refused and sentenced the young man to natural life in prison.
Protests of the FIFA World Cup scheduled to be hosted by Brazil is still being met with protesters who say the event is being hosted at the expense of the poor in the country and protests have been ongoing. Over 100 people were arrested after some protesters battled with police who were accused of trying to stop the protest before it was scheduled to be over.