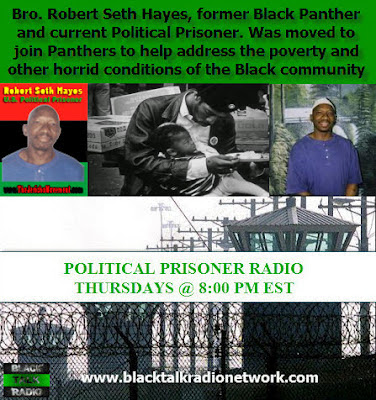 Revisiting the case of Robert Seth Hayes was active as a Black Panther party member and volunteered for many of its humanitarian programs in the community. We last spoke to his daughter Crystal Hayes but tonight will speak with his wife Mrs. Sheila Hayes. She joins us at the 30 minute mark.

DOWNLOAD PODCAST
I want to also examine the current social conditions and compare them to the social conditions that inspired Mr. Hayes in his youth to do something to help improve the plight of Black people during the sixties and seventies.

Many law enforcement agencies systematically oppose the release of all political prisoners like Robert Seth Hayes. People incarcerated for resisting racism and oppression of Jim Crow throughout the nation.

Like many of the millions of people incarcerated on one of America's prison plantation, medical care is neglectful or non-existence and takes lots of effort and pressure from family and lawyers to get these medical needs met. Mr. Hayes has Type II diabetes and Hepatitis C and has recently been extremely ill so we hope to get an update about his current state of health.

Mr. Hayes has been a model citizen despite the conditions and environment He participates in various civic activities and served as a pre-release advisor. What possible reason could there be other than political oppression for the continued imprisonment of Mr. Robert Seth Hayes.