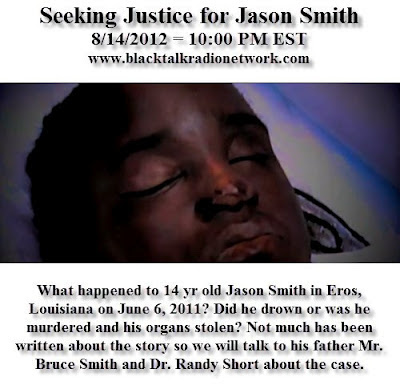 The family of Jason Smith is seeking justice. I will be speaking to his father Mr. Bruce Smith and Dr. Randy Short tonight to get details on the case. Some say Jason drowned, others say he was killed by the KKK and that his organs were stolen and that there is a cover up.

A month long "Caravan for Peace" kicked off Aug 12th and will be trekking across the United States to bring awareness to the death toll in Mexico which is a result of the long standing Drug policy of the United States. As I have reported, President Obama has no desire to change the policy and has actually expanded it into Africa and has allocated hundreds of millions of dollars in 2013 to build new prisons to incarcerate mostly non-violent drug offenders. Is this the right thing to do?

These stories and more plus the best in old school hip-hop and R&B.